Labour in a Single Shot
is a project that we – Antje Ehmann and Harun Farocki – started in 2011. We have initiated video production workshops in 15 cities worldwide. From February 2013 on we are also setting up a series of exhibitions that will show selected workshop results in a larger context.

Costraints
The task of the workshops is to produce videos of 1 to 2 minutes in length, each taken in a single shot. The camera can be static, panning or travelling – only cuts are not allowed.

Labour
The subject of investigation is ‘labour’: paid and unpaid, material and immaterial, rich in tradition or altogether new. In some African countries an entire family lives from cultivating a tiny strip of land next to the highway. In many European countries farmers survive by leaving their soil uncultivated and being paid for it, an arrangement monitored by satellites.

Camera Work
The task as set leads straight to basic questions of cinematographic form and raises essential questions about the filmmaking process itself. Almost every form of labour is repetitive. How can one find a beginning and an end when capturing it? Should the camera be still or moving? How to film the choreography of a workflow in one single shot in the best and most interesting way? Yet the workshop results show that a single shot of 1 or 2 minutes can already create a narrative, suspense or surprise. And this is precisely what we love about many of the workshop videos.

The Web Catalogue
The web catalogue is an archive that includes all the completed videos from all the workshops. It is not a selection of our favourite videos, but a documentation of everything that was produced.

To Open One's Eyes
Labour in a Single Shot aims to respond to and grapple with the specific characteristics of each of the project's 15 workshop cities and regions. In each city we see all kinds of labour going on every day: cobblers, cooks, waiters, window cleaners, nurses, tattoo-artists or garbage workers. But most of the work activities happen behind closed doors. Often labour is not only invisible but also unimaginable. Therefore it is vital to undertake research, to open one’s eyes and to set oneself into motion. Where can we see which kinds of labour? What is hidden? What happens in the centre of a city, what occurs at the periphery? What is characteristic and what is unusual with regard to each city? What kinds of labour processes set interesting cinematographic challenges?

To Use Video as if it were Film
We draw on the method of the earliest films, made at the end of the 19th century (such as the Lumière brothers’ Workers Leaving the Lumière Factory and Arrival of a Train at La Ciotat) in order to regain something of their decisiveness. These early films, made in a single continuous shot, declared that every detail of the moving world is worth considering and capturing. They were forced by the immobile camera to have a fixed point of view whereas the documentary films of today often tend to indecisive cascades of shots.

The single-shot film, in contrast, combines predetermination and openness, concept and contingency. 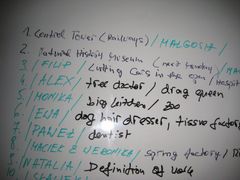